More proof of the use of uranium in shaped charge liners

Also see my earlier article on uranium used in missiles and bombs.

The 1988 Sandia report on conical shaped charge design says that “Since only a relatively small percentage of the liner thickness forms the high velocity penetrating jet, 5 high density material (platinum, gold, etc.) plating of low density (aluminum for example) material would be very desirables. This would produce a multi-layered liner which would be much more efficient for a given CSC configuration. However, the cost of materials and liner forming processes usually prohibit the use of multi-layered liners. The use of single layered liners of depleted uranium and tantalum has been shown to be very effective”. Yet there is no significant US production of tantalum and the country relies on imports for this metal.

The metal said to be used mostly in shaped charges is copper. But one should take a look at this patent used for drilling wells into rock : “From this expression it can be calculated that if a mean density of 3 grams/cm3 is taken for hard rock and a jet length of 10 centimeter is considered, then with depleted Uranium used as the liner the penetration would be 25.2 centimeters. However, tests show that the penetration of such a Uranium jet is about 87 centimeters, a factor of 3.5 greater than expected and a factor of 5 times that measured for the copper jet and for an iron jet 5.4 times greater.”

Here is copper as compared with uranium in a Army Research Laboratory radiograph (copper is on top) : 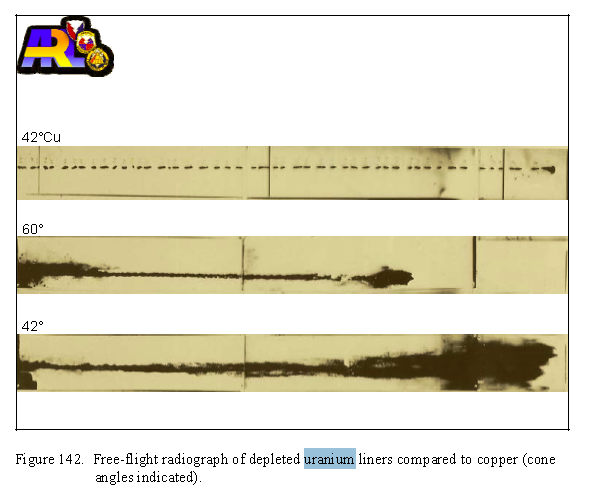 The interest of uranium for shaped charge liners is known since the beginning of the 1970s at least ! See this book published by the National Academy of Sciences, “Trends in the use of depleted uranium”. P. 38 it says :

Here is a process for making particulate uranium for liners http://www.google.ms/patents/US4592790

Making shaped charge liners with Uranium – this is a Canadian defense research report dating back, again, from 1973 https://tinyurl.com/mfpr6b5

This patent has quite a lot of info about uranium in shaped charge warheads http://www.google.co.ug/patents/US5279228

Lastly, here is a report from a US military laboratory (Air Force Armament Laboratory) about uranium liners for shaped charges, dating back from 1979 https://www.cdc.gov/niosh/ocas/pdfs/sec/nucmetals/pet/p195appendd1.pdf

Read again : “if test firings of warheads fabricated from these materials are successful, commercially available DU would be immediately available to meet Air Force needs for a high density SFF warhead”. (SFF warheads are a kind of directed-energy warhead)

Let’s precise that it is clear the thermal effect is essential in these weapons.

This clearly says the jet has a “high thermal effect”.

Lastly, the UK MoD officially acknowledged (until 2006) that it undertook research, jointly with the French, on a shaped charge with uranium. See here for the archive :

“Hydrocode” would refer quite clearly to the ductility of the uranium used as liner (so research quoted here probably wasn’t on cinetic penetrators, it was on liners).

This one needs no further comment. “Rear” = mention of the main shaped charge in a tandem warhead (the anterior one is used to initiate explosive tank armour). So this was certainly for a Javelin-like missile. Maybe TRIGAT which initially involved Anglo-French (later German) research for a shaped-charge warhead ?

(Thanks Dai Williams for the Web Archive link)

A reminder : Communism is nurtured by depleted uranium weapons too