Update : the Sendai nuclear plant is dead… with fallout data

Lung cancer is typically the first to develop from alpha emitting nanoparticulates in flydust and Japanese people have been massively searching “preliminary symptoms of lung cancer” in Google since the day of the fallout :

The fire and nuclear explosions have begun as I announced in an early version of this article before the accident, which I have been able to watch live using a local webcam of the city of Satsumasendai. The great nuclear blast below was recorded at 1 hour 24 min AM on Sept 30 (French local time, as for the Geigers below) :

— since then there have been massive disruptions in the electricity grid in Japan with full suburbs without electricity. Obviously…

The webcam view is an absolute demonstration. The fireball rose in the sky and the rate of nuclear fission increased slowly as happens always in such an uncontrolled situation, with lots of water (in this case) keeping the fireball alive but lots of matter being ejected, hence a nuclear explosion with an extremely low yield (i.e. the % of 235U fissioning in the fireball is very low).

But here’s for instance one additional proof of the evident fallout as the typhoon hurled around the country from South to North, loaded with the remains of the nuclear explosion (and its uranium !) : the caesium found in mushrooms “in the city of Murata” : here the reporter who used a gamma spectrometry instrumentation says he has 180Bq / kg in Cs134 and the same in Cs137 which is a direct proof that this is a very very recent contamination (Cs 134 is much quicker to disappear than Cs 137), unlike what the prefecture claims (with a release producing very low numbers for Cs134 & a high Cs 137 contamination, to attempt to link the contamination – that is publicly known since individuals have reported on it with social networks – with the old Fukushima accident). Another confirmation : detection of 248Cm and 252Cf.

More Google Trends spikes : the first shows that “lung cancer symptoms” have been trending up in provinces of the South West, the second shows a general spike for Japan on “cough with expectorations”.

It is important to see that, while a first spike is evident just after the Sept 30 explosion (below, as soon as October the 1st), Japan has also been under the fallout of the Kori nuclear reactors in South Korea (Oct 6). There is also of course a delay in the development of the symptoms ! Read my academic dissertation on alpha emitting nanoparticulates in the human body – they can literally damage anything. They travel progressively down the body, to the stomach, kidneys, genital apparatus, and through nerves, blood, to bone marrow, brain…

I said I believed the spent fuel pools are not going to resist to the typhoon Trami because the walls of the pool are very thin and cannot resist a strong hurricane but in fact I am very sure that as I felt silently in my conscience somewhere, the concrete walls of the “bunkers” themselves (the shields around the cores) are thin and would not resist as well. It’s clearly obvious the typhoon caused a nuclear tragedy, with the water that decompressed out of the core in the “bunker” boiling, getting mixed with the molten core in fusion and becoming supercritical, blowing away at the end some of the bunker (forming a hole in the concrete shield from which the fuel is “leaking” violently). Very hot water and very hot core mixed with it mean a mix in rotation in which neutrons have much more chances to meet 235U atoms, lowering critical mass as in the tanks penetrated by anti tank arrows with the water of the calcinated human bodies mixed with the molten uranium (see here).

Here is the French government helping the Japanese government to re open the Sendai NPP, by covering the most sensible topic they had in common i.e. spent fuel pool management : 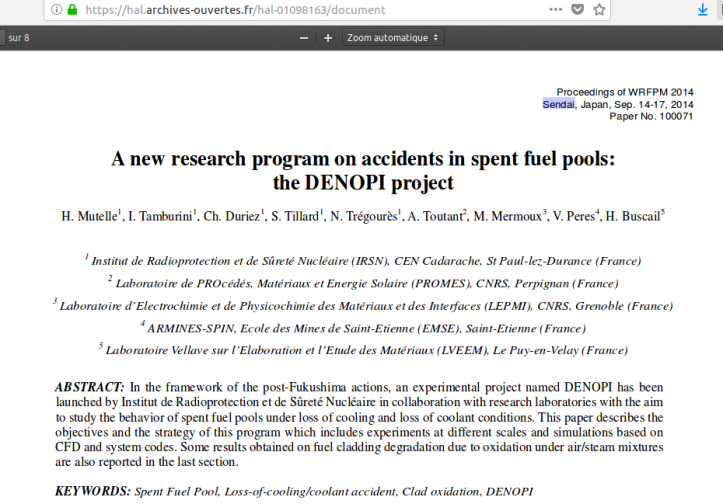 The typhoon winds are slow right now but it will be well faster at impact and flying objects can cause a leak in the pool.

So what happens when water leaks is that it starts boiling and there is a fire as you know very well, and the rods melt, mix with water, where fission happens because, once dissolved into water, the critical mass threshold is MUCH lower, these explosions (that also happened very very very frequently in Fukushima) increase the energy output and the fire until all the water is gone, all the fuel needs to burn !

Please see : – what happened in Fukushima

More unbelievable : the Brunswick nuclear reactor fire and explosions and their fallout

For the spent fuel pool another big issue is the cooling systems that are highly exposed to the elements and have a no so limited risk of being destroyed.